The Latest in Marketing, Public Relations, and Brand Storytelling

R. Michael Brown’s portfolio shows examples of content that was created by Mike as part of his integrated marketing, communication, and public relations plans and campaigns.  We specialize in the following market spaces: Tech, Healthcare, Science, Environment, Real Estate and Builders, Architecture and Construction, Government and Public Policy, and Nonprofits.

One of our specialties is creating brand feature stories (in all media – print, web, video) about products or brands.  It’s called “Brand Storytelling.”  Some of these stories are included here along with other types of marketing, public relations, and advertising campaigns.

A few years before the shock of 9/11 in 2001, R. Michael Brown wrote and produced this 90 sec. spot that was the essence of what the Motorola Business & Government Division did for the marketplace.  It was video recorded around the world for other projects and post-produced in-house at the studio his team and he built at Motorola in Sunrise, Florida. The brand video was shown at the Motorola Board of Directors meeting, sales presentations around the world, customer briefing centers, employee town halls, Motorola Museum, civic groups and government presentations – and received a standing ovation everywhere it played.

Employers and Clients: You can become the news for your market or industry!  While working for a nonprofit in the Town of Palm Beach, Florida, R. Michael Brown launched a weekly Internet and social media broadcast called This Week in Palm Beach on the channel he founded, Palm Beach TV.  He wrote and produced each weekly 4-5 minute show, had professional camera crews and on-camera talent with him on the shoot, and the results were spectacular.  We had an average of 84% of the town watching every week!  Some examples:

See how the broadcast and email newsletter work together by following this link:
This Week in Palm Beach – 4/5/2019

See how the broadcast and email newsletter work together by following this link:
This Week in Palm Beach – 3/22/2019

Click to See the Newscast Script PDF of the Above Video Written by R. Michael Brown. The on-camera talent memorized the highlighted segments within a few seconds of arriving at each location.

Imagine your business, industry, and market as the focus on your own channel!  It’s the fastest way to be a thought leader in your industry and it’s surprisingly affordable to do. At this point, with proper lighting and audio attachments, Mike’s starting to shoot many of these with his iPhone.

Video is the answer to getting attention on social media and above the noise on the web.  The system for executing this kind of brand storytelling strategy, as part of an overall Integrated Marketing and Communication Plan, is available by contacting Mike@RMichaelBrown.com

You’ve seen it and likely smelled it, Sargassum seaweed. If you live in Palm Beach or visit during the summer, you’ve stepped over it on your way to the water at the beach. But this year it’s different.

The invasion started in April. The Civic Association received a news tip from Diane Buhler, founder of Friends of Palm Beach, as they were cleaning the beaches on the north end. Mounds of Sargassum were piling on the beach with vast sheets of it stretching out to sea.

We contacted George Buckley, a Harvard University scientist that has been investigating the Sargassum bloom infecting the Carribean, the Gulf coast, and now Florida. His theory on this growing threat has scientists, government leaders, business owners, residents, and tourists troubled throughout the hemisphere.

“Throughout the Caribbean and Gulf of Mexico we are seeing phenomenal blooms like we’ve never seen before,” said Mr. Buckley. “The question is, where does this come from, what causes this?”

Satellite photos show the equatorial currents of Brazil, coupled with the North Atlantic current, brought sargassum into the Gulf of Mexico and Caribbean Sea where the right conditions, warmer water and pollution, caused the seaweed to literally explode.

“The ocean is about a degree centigrade higher than ever before and pollution worse than ever before,” said Mr. Buckley. “There are nutrients washing out from the entire east coast of South America and from North American into the Gulf. This great mix, this soup, has created just the right conditions for Sargassum seasweed to take off.”

The result… virtually every island in the Bahamas and Caribbean are inundated by sargassum causing terrible economic and environmental problems. Nutrients from millions of gallons of Amazon and North America runoff are playing a role. [See the video below for the full story]

At Motorola, R. Michale Brown and his team won the World Wildlife Fund International President’s Award for a series on how to “Connect and Conserve” to Save the Planet. Mike wrote articles, photographed, and produced media in the Galapagos, Rain Forest in Brazil, and Florida Keys for the series. The Galapagos video below was picked up by Discovery Channel International.

World Wildlife Fund in the Galapagos

Town of Palm Beach Ocean Rescue is advising beachgoers to watch out for a stinging danger that is blowing ashore in the water and on the sand at area beaches.

They are blue, pink, and purple balloon-like creatures and they’re called Portuguese Man-O-War – a critter that packs a sting that is much more severe than your average jellyfish.
See More (Civic Association News)

The Town of Palm Beach Civic Association turned 75 years-old in 2019 so R. Michael Brown wrote and produced an integrated campaign for the occasion.  The Civic Association has been a watchdog over the town, working since 1944 with government, political leaders, residents, and stakeholders to keep the island a special place. Here’s the video that was highly praised by leaders in the town, businesses, and residents:

Every year for 11 years, during the Palm Beach Civic Association’s Annual Meeting at the Flagler Museum, R. Michael Brown produced an end-of-season show and video. Here’s a sample below.  In addition, Mike has written executive and political leader speeches and produced multimedia (video, PowerPoint, and live presentations) for CEOs, board of director meetings, trade shows (Consumer Electronics Show [CES], COMDEX, National Association of Broadcasters [NAB]); Motorola; IBM; and clients around the world

R. Michael Brown has written and produced content about healthcare for years including stories on the H1N1 flu and pandemics, strokes, heart attacks and cardiac care, emergency medicine, paramedics, slip and fall prevention, elder care, hospital operations, health advances, biotech with Scripps Florida, and more.  A new CEO took over at Good Samaritan Medical Center hospital and Mike wrote and produced a feature story about her first experience there.

Since Good Samaritan is the closest hospital to the Town of Palm Beach, this news feature was one of the most watched ever in town.

Dr. Oz is a resident of the Town of Palm Beach and he agreed to be a speaker at the Palm Beach Civic Association Annual Awards Luncheon at The Breakers.  R. Michael Brown wrote and produced his commercials which played during the Dr. Oz show in the Palm Beach and Treasure Coast Market:

The campaign resulted in a large percentage of the town government property, businesses, and residents participating and it saved so much water that the Town Council voted to make smart irrigation controllers mandatory for any new construction and remodeling in the town.

IBM hired R. Michael Brown to work in corporate communications and with IBM Press right off the masthead of Popular Computing magazine where he was a freelance Contributing Editor.

He and his team won a NY Film Festival Award when they released “Introducing Ultimedia” which explained multimedia and the Web six years before it went live. IBM CEO Lou Gerstner showed Ultimedia on Good Morning America, the Today Show, Discovery Channel and many others and made the cover of industry trade magazines throughout the world.

R. Michael Brown has rebranded, marketed, and reported on the best brands in the architecture, building, and construction industries.  Brands like Pulte Group, DiVosta Homes, DelWebb, and projects in the Town of Palm Beach. Examples: 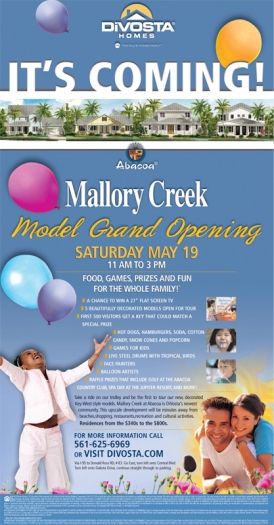 After the great recession started and real estate correction continued, Minto hired Mike to help attract buyers. His integrated Web, Google AdWords, Email, Social Media, and Print campaign targeted markets that weren’t in recession at the time: Canada, United Kingdom, Netherlands, Germany, and Venezuela. It worked. Minto Florida went from only $9.8 million in sales the previous year to over $81 million in sales in 9 months during the real estate collapse.

To say that the new magnificent Amangiri resort in Southern Utah is isolated is an understatement. The resort collects guests from the nearest airport in Page, Arizona with one of their fleet of BMW’s.

As one visitor of the $800 – $3,500 per night suites said, “We arrived in the middle of the night, greeted by not one, but two Aman staff. The entire resort was bathed in candlelight, dozens of lanterns artfully cascading light along the graceful grand staircase.”

The daylight reveals rooms made of solid concrete, ph-balanced and treated to match the patina of the surrounding cliffs and canyons. They are like square luxury caverns looking out at the Southwestern desert.

Promotions Work
Weekly or periodic promotions keeps your brand and offerings fresh in the minds of your email list.  This “Floor Plan of the Week” campaign resulted in more traffic to see the models and options.

Olympia: Another Community, Another Successful Promotion
The “Floor Plan of the Week” campaigns work especially well with inventory homes that are completed or near-complete.

About The Palm Beach Civic Association 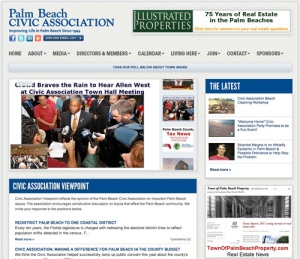 R. Michael Brown created a complete integrated strategy with web, email newsletter called “This Week in Palm Beach,” direct mail, social media, events, and more to turn this brand around – attract more directors, build membership, raise funds, and become one of the main serious news sources in town. The image to the left was the first website.